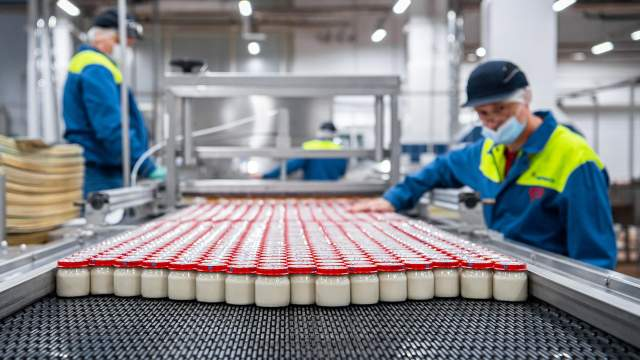 Russian scientists have created the basis for hypoallergenic formulas for baby food, which will allow import substitution of foreign-made components. The development was carried out by specialists of the Federal Scientific Center for Food Systems named after V.M. Gorbatov RAS together with technologists of the Kozelsky dairy plant.

Such mixtures are created from milk protein. So that the food does not cause unwanted reactions in the baby, an enzyme preparation is added to the serum, which breaks down the protein into fragments – peptides at the molecular level, Alexandra Surzhik, Candidate of Medical Sciences, an expert in the field of functional nutrition of the Federal Scientific Center for Food Systems, explained to Известия

“The protein is broken down into such fragments that cannot cause an allergic reaction,” the expert emphasized.

Now, up to 90% of components imported from Western countries are used in the production of baby food, experts interviewed by Известия said. Basic ingredients in Russia are either not produced or produced in small quantities, explained Tatyana Kasimova, Director of Product Development of the Marketing Agency of the Federal Scientific Center for Food Systems. In the context of a break in supply chains and instability of the exchange rate, Russia is interested in import substitution of components that were previously purchased abroad.

“The country’s annual need for formulas for artificial feeding is about 30,000 tons,” said Tatiana Kasimova.

This figure is growing, added the president of the food industry development association “Eurasian Council of the Industry of Specialized Food Products” Yuri Zubarev.

According to the Ministry of Agriculture, in 2021 the volume of production of breast milk substitutes amounted to 32 thousand tons, Известия wrote. Today, a significant part of the Russian market is divided among themselves by five manufacturers whose capacities are located within the country: Nestle (Switzerland), Danone (France), Беллакт (Belarus), Инфаприм and Фармалакт (both Russia). Foreign companies have not announced their withdrawal from Russia, but they are unlikely to implement large investment projects here, experts say. The capacities of companies in Russia make it possible to increase the volume of production if necessary, according to the Ministry of Agriculture.